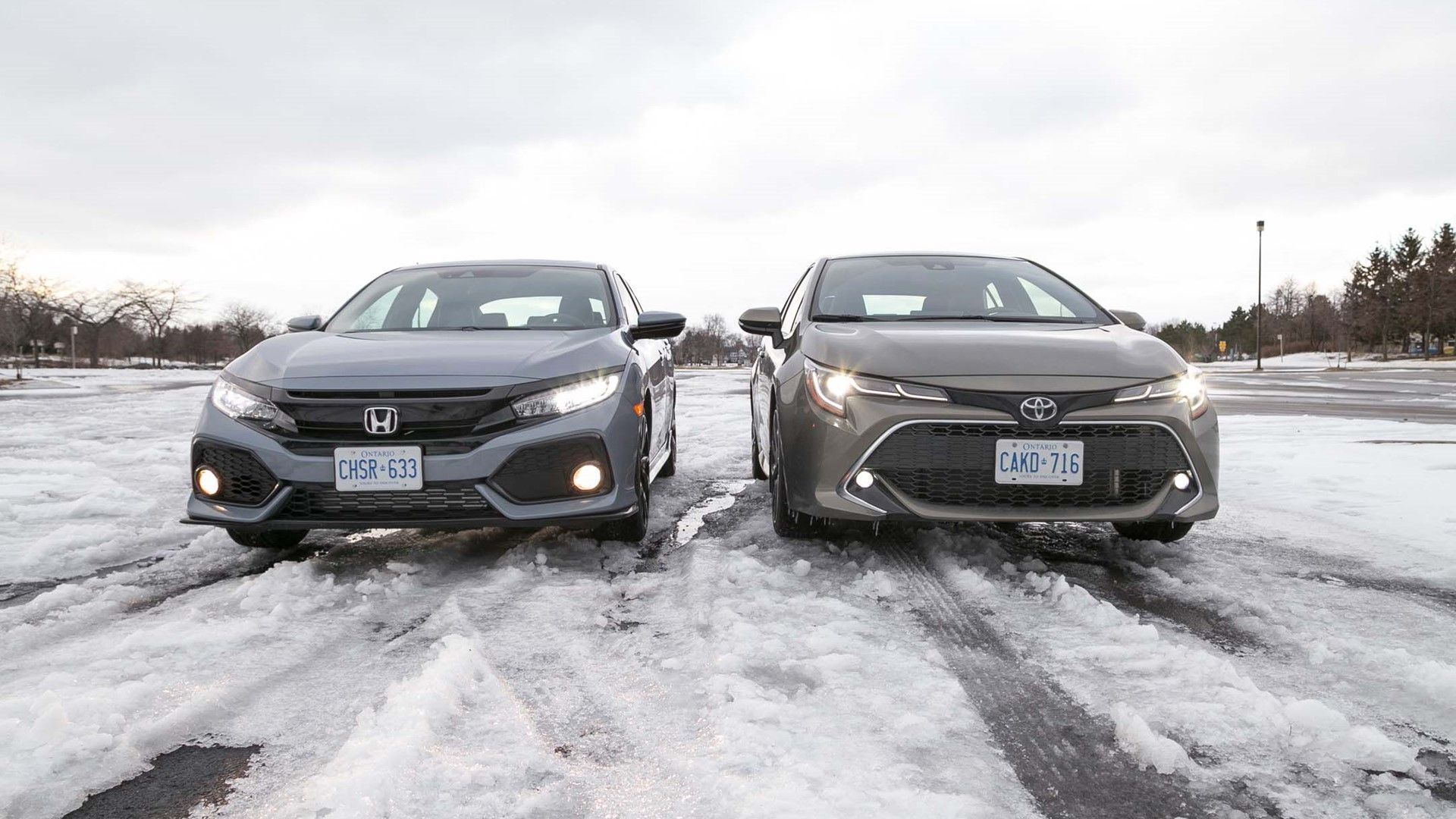 Check out the 2019 Civic Hatchback vs 2019 Corolla Hatchback Comparison Review that Autotrader.ca just put together.

“If you’ve come here looking for information on these two cars because they’re on your shopping list, you deserve a pat on the back since it shows you’ve been paying attention.

Like us, you’ve probably come to expect that the Honda Civic and Toyota Corolla are solid and sensible modes of transportation. Each company sells an impressive number of these models because they’ve become the paradigms of smart automotive decision making and really, it’s tough to fault someone for choosing to spend their hard-earned money on either one.

The fact is, both of these cars promise their owners efficiency, practicality, safety and – if the past several decades have shown us anything – long-term reliability. We won’t discourage you from purchasing either one or, heck, one of each if you’re so inclined, but it’s also our job to share with you what we’ve found after we spent a week driving them back-to-back, so let’s get on with it.

Not long ago, Corollas – especially beige ones – became known as bland, lifeless appliances of the automotive world. Sure, they have always been durable and efficient, but they were also about as fun and fashionable as a pocket protector. But looky here, Toyota’s designers have penned a truly great-looking compact hatch. Its proportions make it appear low and squat, with sheet metal stretched out over the wheel arches, and squinty, mean-looking lighting, front and rear, giving the Corolla a more youthful appearance than it’s had in years.

What’s more, it can be ordered in a sensational, bright “blue flame” paint hue that stands out in any parking lot. This test Corolla’s “bronze oxide” paint looks great, especially in sunlight that helps to really showcase the car’s styling details.

Ironically, the colour isn’t too far off beige, or at least taupe; and as great as it is, compared to the Civic, the Corolla looks a little, uhh… sensible.

Honda’s designers went a different direction, giving the Civic a collection of hard creases and angles that conspire to make an overall appearance that few would call beautiful. Managing Editor Michael Bettencourt noted, “with strong air intakes, lower front splitter, and a dual-tipped centre exhaust, this one seemed playfully enthusiastic, but this design recipe with good ingredients is just not quite fully baked.”

Still, with its 18-inch wheels, “Sonic Grey” paint and blacked-out grille, this Sport Touring Civic is at least aggressive in its outward style.

By and large, Honda and Toyota have each done an excellent job on the interiors. Controls are sensibly laid out and easy-to-reach, and the materials are of a high quality, giving a great tactile experience.

The Corolla’s seats are finished partly in leatherette and partly with a cool black-and-white tweed-like fabric. They look good and were suitably comfortable, especially thanks to the adjustable lumbar support.

The Civic’s seats are finished in black leather, but proved to be less comfortable than the Corolla’s. Honda adds seat heaters to the front and rear seats, whereas Toyota has them only on the fronts. Plus, the Civic had a remote starter to help get the cabin toasty warm before a driver gets in and drives away.

A very excitable Bettencourt pointed out that the Corolla makes up for these shortcomings with a very important feature: “All hail the heated steering wheel! In any Canadian winter, this one’s a godsend, and only the Corolla had it here.”

Of course, had it been summertime instead of a particularly frigid winter test, we might not have cared so much about those details, instead fixating on the sunroof found on the Civic that’s absent from all Corolla hatchbacks.

The Civic’s longer wheelbase begets a more spacious cabin, equating to 277 L of additional passenger room over the Corolla, although tall individuals may appreciate the greater headroom in the Toyota afforded by its lack of sunroof.

Let’s call this one a draw.

When the current-generation Civic appeared, it had a slick-looking touchscreen infotainment system that had one fatal flaw: a lack of a proper volume knob. Honda suffered enough criticism over it that all subsequent new models have added the beloved knob, including this 2019 Civic.

The rest of Honda’s infotainment system has been intuitive and user-friendly for years, and it remains so here. Graphics from the on-board navigation system are bright and crisp, and more importantly, the interface with Apple CarPlay and Android Auto is slick and easy. Even the 12-speaker audio system sounds pretty good.

Toyota has been pretty stubborn with their proprietary system, being among the last of the hold-out manufacturers to not offer one of the widely accepted smartphone interfaces. However, Apple CarPlay is finally available on the Corolla’s 8-inch touchscreen perched atop the dash. Android users are still out of luck, requiring instead to work with Toyota’s suite of mediocre apps. Mapping graphics from the embedded navigation system are unimpressive, too.

The XSE trim doesn’t get an upgrade over the base Corolla hatchback’s eight-speaker system and the tinny sound quality is disappointing, particularly when listening to highly compressed satellite radio feeds.

In these top trims, both cars offer wireless charging that worked well, even through my iPhone’s case, and provided a convenient tray in the centre console. That said, Michael and I both found the Corolla’s charge cubby tucked far enough under the dash that it made it easy to forget our phones when leaving the car.

Every Android user will agree, it’s the Civic for this one.

It’s in the driving that these competitors differ greatly. The Toyota doesn’t quite live up to its sporty visage, but it is satisfying to drive. Its handling is stable and competent enough to border on fun when the roads twist, but the steering (like most electrically boosted systems these days), is pretty absent of feel. The Civic’s steering is a bit quicker and its handling a little livelier. The Corolla’s brakes are a bit grabby at first, but otherwise both cars stop smoothly and quickly, without issue.

The Corolla is powered by a 2.0-litre four-cylinder engine, and despite the current industry trend to turbocharge everything, the Toyota’s four-pot is naturally aspirated. The result is 168 hp and 151 lb-ft of torque at a fairly lofty 4,800 rpm.

The Civic Hatchback’s engine is 25 percent smaller at only 1.5 litres, but its four cylinders are assisted by a turbocharger, providing 180 hp (at 1,100 fewer rpm than the Corolla) and, more importantly, 177 lb-ft of torque at only 1,900 rpm.

The difference in personality afforded by these two engines is considerable. Not only can a driver feel the extra power when passing, but the added torque at so low in the rev range means the Civic is notably zippier around town.

Neither engine is overly quiet, and when accelerating up to highway speed, the Toyota really sounds unhappy, but once up to speed, the Corolla settles into a smooth, comfortable cruiser offering the more peaceful and supple-riding cabin of the two. Bettencourt suggested the Corolla was the more refined choice overall, and I don’t disagree.

In the interest of efficiency, both cars are fitted with CVT transmissions. The Corolla’s relative lack of torque is exacerbated by the rubber-band feel of the transmission, making it less responsive when pulling away from a stop. Toyota and Honda have each fitted their cars with paddle shifters, which serve up simulated gear changes, though add nothing to the driving enjoyment of either car.

Honda and Toyota both offer six-speed manuals with these models, and anyone with the slightest inkling of driving enthusiasm should specify their Civic or Corolla with this configuration, making for a far more engaging and fun driving experience.

While this is the liveliest Corolla we can remember in recent years, it’s still the softer, more subdued machine, but not so much softer or quieter than the Civic to make up for its performance (and fun) deficit.

Dimensionally, the Corolla is 149 mm shorter and 88 mm narrower than the Civic, which means it’s easier to navigate in tight urban spaces.

The downside to that is a smaller cabin providing less room for passengers. What’s more, with the rear seats up, the Civic’s cargo hold will contain 728 L of luggage compared to the Corolla’s meagre 510 L. With the seats folded down, the Civic’s cargo capacity nearly doubles to a much deeper and longer space.

While Civic is still a remarkably efficient vehicle, the Corolla is better; but the latter is a smaller car, with less usable interior space, so we’ll call this one a tie, too.

As the top-of-the-line trims, both the Corolla XSE and Civic Sport Touring are very well equipped, offering up features and safety functions that were reserved for high-end luxury cars only a few short years ago.

Lane-keeping assistance, automatic high-beam control (and LED lights of course), plus adaptive cruise control (the Civic’s enables stop-and-go functionality in traffic) are all standard fare on these two machines. The Civic also offers up dual-zone climate control, plus the aforementioned leather interior, sunroof, and remote starter that aren’t available on the Corolla. The Toyota has Bettencourt’s beloved heated steering wheel.

The Corolla’s fuel efficiency will amount to a few Starbucks visits per month for the average driver – hardly a huge sum – but spec’ed up as our XSE is, the MSRP is $27,980. The Civic’s is $31,290. Is the sunroof and leather worth more than $3,000 to you? It should be noted, a Civic Hatchback in Sport trim is priced almost exactly the same as the Corolla Hatchback XSE and offers very similar equipment.

The Corolla XSE is a pretty great value and wins this one.

A buyer really can’t go wrong with either of these cars. Those favouring efficiency, smoothness, and frugality will likely prefer the Corolla, while those putting more emphasis on an engaging drive will do better with a Civic, but ultimately, these are two very closely matched machines. There are other excellent hatchback choices around this $30,000 mark too, including Volkswagen’s venerable Golf, Hyundai’s Elantra Sport, and the highly anticipated new Mazda3 Sport. There really is something for every hatchback buyer’s tastes these days.

Our categorical breakdown shows that with a pair of tied categories, each car has netted four wins here, but between the Corolla Hatchback XSE and the Civic Hatchback Sport Touring, our driving enthusiasm has us choosing the Honda as our favourite.”

Did you like this comparison review? You may also like to check out the comparison test MotorTrend Magazine did of the 2019 Honda CR-V and the 2019 Toyota Corolla. Click here to read the article.